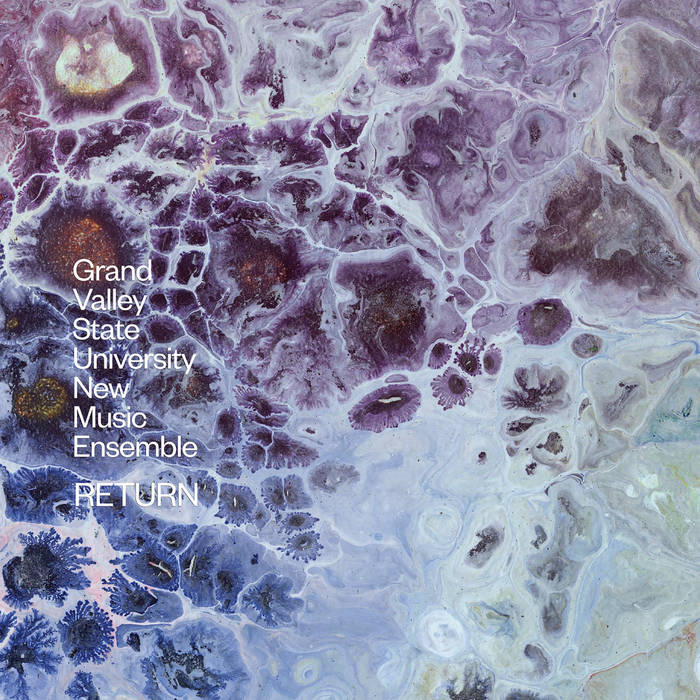 The New Music Ensemble at Grand Valley State University (Allendale, MI) has established itself as an innovator and incubator within the new music community. Founded in 2006 by Director Bill Ryan, the ensemble has commissioned over 60 new works, toured extensively, and received wide recognition for its recordings of both Steve Reich’s Music For 18 Musicians, and Terry Riley’s In C. These albums have been on year-end best-of lists at WNYC, Time Out Chicago, the Washington Post, the New York Times, LA Weekly, and many others.

In its 11 years, the program at GVSU has developed a proud and supportive culture. Realizing a longtime goal of an “100% homegrown project,” Ryan, who also teaches composition at GVSU, turned to program graduates: Adam Cuthbert, Matt Finch, and Daniel Rhode after continuing to follow the work of the three composers on their recently formed experimental collective, slashsound.

Return is a forward-looking electro-acoustic vision. The 15 tracks are a lush and explorative marriage of electronic and acoustic sounds and gestures, in what Cuthbert describes as “electronic chamber music.” While rooted in the initial notation provided by the composers to the ensemble, recordings of this material were then used by the composers as the raw material (or “samples”) for the album. Despite creating something completely new out of the source material, the traditional composer/performer foundation provides an undeniable intimacy and warmth.

Thanks to the Board of Trustees, administration, faculty, staff and students at Grand Valley State University. Thanks to violinist Todd Reynolds for his guest performance on glass surface.

For more information on this and other projects visit www.newmusicensemble.com

© Bill Ryan, 2017. All Rights Reserved.
innova is the label of the American Composers Forum.
www.innova.mu
www.newmusicensemble.com

Bandcamp Daily  your guide to the world of Bandcamp

Featured sounds from Fly Lo and Ahmed Idris, plus Mother Nature hops on to drop off new project